The Love of Our Good Father

read more
The Love of Our Good Father

Humility Is A Place of Protection

read more
Humility Is A Place of Protection

The Miracle-Working Power of Christ In You

read more
The Miracle-Working Power of Christ In You

Helpful Tips To Be A Successful Christian

read more
Helpful Tips To Be A Successful Christian

What We Learn From Jesus’ Prayer For Us!

read more
What We Learn From Jesus’ Prayer For Us!

Whatever He Tells You, Do It!

read more
Whatever He Tells You, Do It!

Nothing Comes Close To Knowing Jesus

The Love of Our Good Father

Humility Is A Place of Protection

The Miracle-Working Power of Christ In You

The Spanish Mackerel has always been one of my favourite fish to catch. It’s a great fighter, makes superb eating, and hunting this fish has taught me an important lesson about breaking free in life.

The Game of Fishing

As an avid angler living in Singapore, I used to fish the rich waters off Malaysia and Indonesia with my fishing kakis (friends).

How a fish tastes is secondary when we go fishing. Top of mind is how hard the fish fights. We long for the surge of adrenaline when a fish is hooked. We admire the skill it takes to land a big fish on light tackle.

Small reels, lightweight rods and thin line give the fish a fighting chance to get away. There’s no certainty of a catch until the fish is safely in the boat! We even catch-and-release certain species of fish, which is why we call it game-fishing.

The Narrow-barred Spanish mackerel, commonly referred to locally as batang or tenggiri, is an important food fish for many in Southeast Asia. Protein-rich and high in Omega-3 acids, you’ll frequently see them in our local markets.

Delicious as it is, the Spanish mackerel is an even better gamefish. It’s a powerful and clever fish to fight on light tackle. Freshly caught, the batang has superbly sweet and firm flesh that makes a lovely meal when cooked the day it’s caught.

The batang is a gamefish you can eat!

The batang is fairly common in local waters, but you must know where to find them. Nearer to shore, local fishermen build simple Fish-Aggregating Devices (FAD) called unjums. These underwater structures form the basis for communities of small fish, which in turn attract predatory schools of batang.

Pelagic mackerel are ferocious predators that encircle shoals of smaller fish before ripping into their prey with razor-sharp teeth. They have streamlined bodies and a forked tail fin built for sudden bursts of lightning speed.

The daytime photos in this article are of fish hooked off the eastern coast of peninsular Malaysia in shallow waters 15 to 30 metres deep. These smaller batang weigh 3-6kg and put up a nice fight on ultra-light tackle.

The night shots are of bigger Spanish mackerel caught in deep water off the Sabah coast. We were fishing in waters 80 to 120 metres deep, over 80 nautical miles from shore.

These big tenggiri hit us late at night and fought savagely. We had to use heavier tackle to land them because there were even bigger gamefish in the vicinity.

How To Catch Spanish Mackerel

Here’s how I used to fish for batang in shallower coastal waters.

When a fish feels a hook in its mouth, it runs! It uses all its power to fight, aiming to bend the hook or break the line holding it.

The fisherman must set the hook as soon as he can, using the speed of the fleeing fish to drive the barbed hook deep into it’s flesh. Once the hook is set, the fish has little chance of escaping.

Even then, an experienced angler keeps the line tight to prevent the fish from dislodging the hook. A tight line stops a hooked fish from throwing the barbed hook with violent underwater movements.

Batang are smart. Unlike most other fish, they stop running the moment they feel the hook. They then turn and swim toward the boat! This causes the line to go slack, giving the fish time and space to shake the hook free and escape.

Many inexperienced anglers let their guard down when their line suddenly goes limp. Anticipating a broken line, they move with discouraged lethargy, allowing the wily batang to escape!

Strong as the batang is, it chooses not to fight. It does not allow the hook to set, choosing instead to shake it free before the opponent can sink the barb into its body.

Lesson From A Fish

Do you sometimes get insulted by others?

Has someone said hurtful words about you, or called you unkind names recently?

If you let them dig deep into you, they’ll be very hard to shake off. They will entrap you, driving deeper and deeper the more you fight.

Be like the batang when people insult you. Don’t fight like a normal fish. Your strength will help drive the barb of hurtful words deeper into you, and you’ll end up as someone’s dinner.

When you hear hurtful words, do the opposite. Do the unexpected.

Let the line go slack. Shake the hook free before the barb sets, before you’re made a prisoner to someone else’s words.

Don’t set the hook. Shake it off and live. 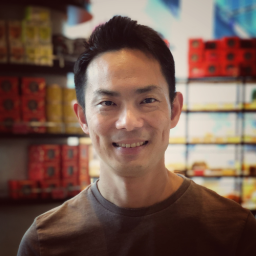 John is a Christian business adviser and marketing specialist that writes for both Onward and Upward at Waymaker. Connect with John at waymaker.sg!